This romantic drama, an official adaptation of the acclaimed Marathi hit film “Sairat,” is set in Rajasthan. Picturesque Udaipur provides the colorful backdrop for young love battling societal rules and class distinctions. The late Sridevi’s daughter Janhvi Kapoor makes her debut as Parthavi, a lively and confident girl from a political family. Ishaan Khatter, plays Madhukar, the innocent young boy from a middle class background who seeks to impress her. Khatter is Shahid Kapoor’s half-brother. As Parthavi and Madhukar’s love grows, so do the problems. When their families oppose the relationship, they run away but things get worse and their fate is uncertain. It’s the classic story of star-crossed young love often seen in Hindi cinema with a charming new couple and fresh soundtrack. Let’s see if this remake finds as much success as the original. Karan Johar is one of the co-producers.

This biographical film tells the dramatic story of actor Sanjay Dutt with Ranbir Kapoor playing the title role. Coming from a family of cinema legends, we see Dutt in various stages of his enigmatic life, from his early days with his film debut in “Rocky” and the growing adulation of fans to battles with various addictions leading to his darkest depths. There are brushes with the underworld, prison terms, loss of loved ones and speculation whether he’s a terrorist. Kapoor has gone to lengths to capture the style and body language from each stage of Dutt’s life, even taking time between each transformation. 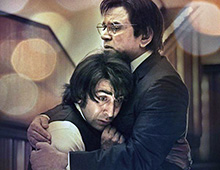 The ensemble cast features Manisha Koirala and Paresh Rawal as parents Nargis and Sunil Dutt, and Vicky Kaushal as Kumar Gaurav. Expect to see a few of his lady loves played by Sonam Kapoor and Karishma Tanna. Dia Mirza plays wife Manyata Dutt. The biopic takes a comedic and heartbreaking exploration of one man’s battle against his wild self and formidable external forces thrown at him and his journey through it all.